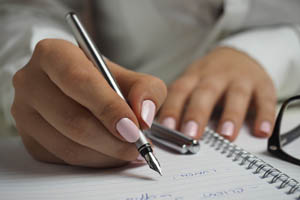 Find out about the parishioners of Winterslow who made the ultimate sacrifice in World War 1 and World War 2.

The Role Of Honour to the fallen of WW1, hangs on the wall of All Saints Church. 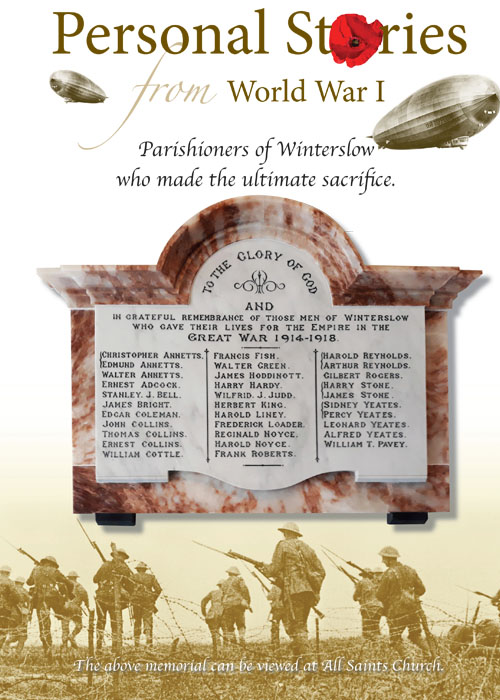 Frederick James Hoddinott
You may read the story 'One Pound Of Love' here. 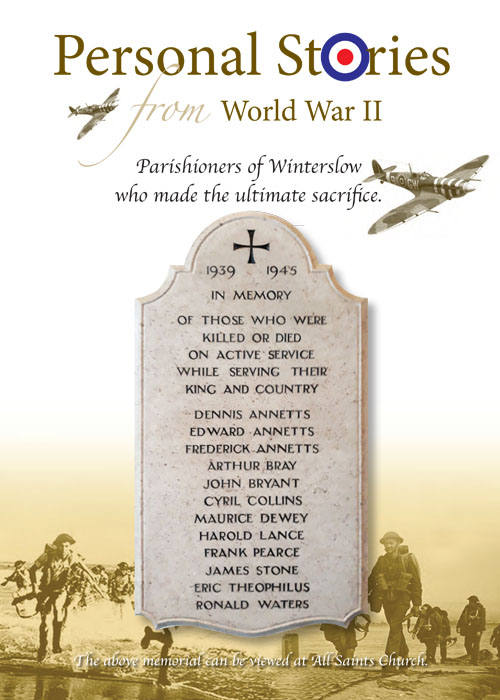 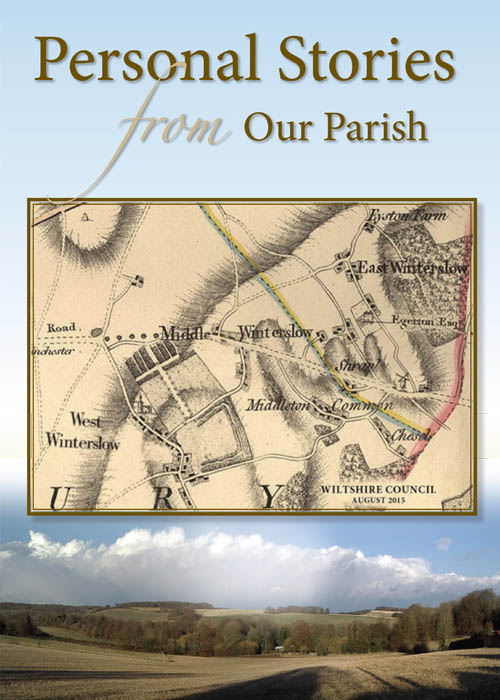 Down Your Way Part 1

Down Your Way Part 2 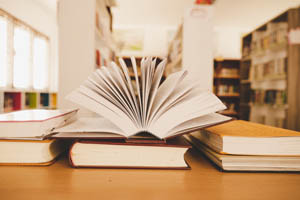 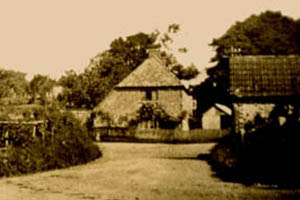 The history of the Winterslows goes back a long way! It is great to have such a rich history within our Parish boundaries so please read below just how the Winterslows came into existence to become such a great village.

On Easton Down, in the north east of the parish, Neolithic and early Bronze Age flint mines have been located. Excavations in East Winterslow have also located traces of a number of Iron Age and Roman farms. In addition two Saxon cemeteries on Roche Court Down, north of the junction at Lopcombe Corner, have been discovered. The Roman road from Old Sarum to Winchester passes through the parish and the site of a Roman villa has been found near All Saints church in West Winterslow. Evidence of occupation over the course of many centuries has therefore been found within the parish.

The Doomsday Book and A Thousand Years

By the end of the 19th century the three distinct areas of population were very evident. In West Winterslow there was a cluster of houses near All Saints Church and another close to the junction of Weston Lane and Livery Road. In Middle Winterslow there were houses from the village school, which was built in 1856, to Middleton Manor; including dispersed homes around the Flood. Another centre of population was in an area around the junction of Weston Lane and Middleton Road. Here could be found dispersed cottages along Middleton Road, Gunville Road and stretching down Witt Road. 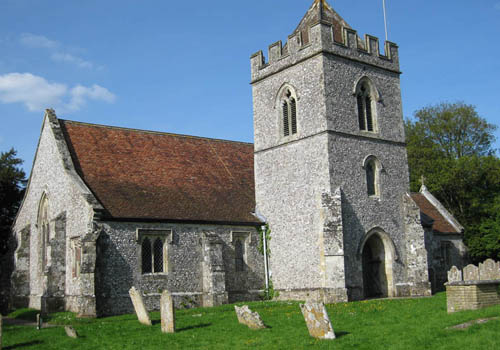 All Saints Church
Apart from the dwellings forming the three main centres of population there were isolated cottages and houses dispersed across the Parish the land of which was almost entirely given over to agricultural activity and coppicing.

This open landscape began to change in 1892 when the Winterslow Land Court was established resulting in the construction of homes on smallholdings of varying sizes from five to seven acres. Initially these were located in the land between the Causeway and Middleton Road, followed by the area bounded by Witt Road, Gunville Road and Tytherly Road. The majority of the smallholders had other occupations so used their land to provide food and to supplement their income. East Winterslow comprised a small number of farms with associated buildings on top of the hill.

There was little change at Middle Winterslow or at West Winterslow prior to the Great War. At East Winterslow there were very few dwellings and all were mainly farm cottages.

The inter-war years brought little change. A little sporadic building took place as infill between existing buildings, but the three communities remained separate and appear in contemporary maps and directions as West Winterslow, Middle Winterslow and The Common.

Middleton Road (from the field now occupied by the Village Hall)
The Second World War brought a number of changes to life in Winterslow. Approximately two hundred children with their teachers from the Portsmouth area were evacuated to the village and, in Bentley Wood, a military camp was built for American armed forces. The Women's Institute history of Winterslow notes the considerable impact this military presence had on the area, the roads being often "choked with heavy tanks and jeeps". Bentley Wood took on further significance when, after its sale by the Forestry Commission to Lady Coleman in 1983, and its designation as a Site of Special Scientific Interest, and she bequeathed it to the village and a trust known as the Friends of Bentley Wood was created to maintain it. 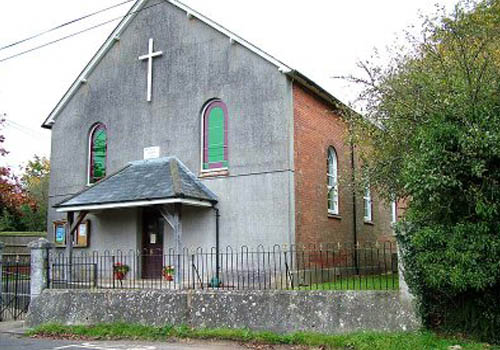 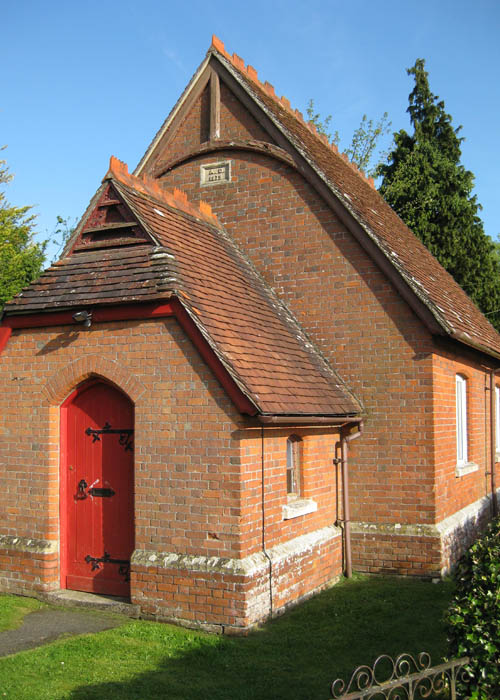 
The first council houses were those in Red Lane, built in about 1939. In the inter-war period, a few houses were built along the Flashett. The 1950's brought a few more there and in the Shripple, followed by some in Cow Lane behind what was then the Lion's Head public house (now four homes).

The Common showing the Methodist Church at centre of picture
All these developments added to the Gunville Road and The Common community that also had several shops, a Methodist Chapel and St. John's Church. The second set of council houses was built just after the Second World War at Highfield Crescent. These, with some other new buildings in the 1950's, simply added to the Middle Winterslow housing cluster, as did the 1959 council bungalows in The Flood and the 1960 additions to Highfield Crescent. 1965 saw more council bungalows at Common Vale, but again, these were an infill between existing properties.

The most significant changes came after 1967, when a large new housing estate called Saxon Leas appeared on land that had been part of Shripple Farm. The first phase was built in about two years, but a second phase some ten years later increased the estate considerably. In 1982 an adjoining site was opened up and developed as Young's Paddock, which in turn was followed by Stone Close and Weavers Close, to effectively fill the space between Middleton Road and the Causeway before the end of the century. The Causeway, itself, had been made up from a track in 1960, and this encouraged some infill between old Land Court properties. By the 1990's there was almost continuous housing in the area bounded by Cow Lane, the Shripple, Middleton Road and the Causeway.

Meanwhile, a row of new houses on the south side of the Common, built in 1983, meant that there was continuous housing from Gunville Hill to Saxon Leas and on to the Causeway. In 1977 another small estate, Woodland drive appeared, effectively linking the Causeway to Middle Winterslow.

In 1992 the village hall complex was built, thereby shifting the focus of social activity away from Middle Winterslow. In 1999 Bell's coaches was sold and the Old Coach Yard was developed to add yet more houses between Middleton Road and the Causeway, and in the 21st Century, some new houses have been built as infill near the Doctor's surgery on Middleton Road.

Similarly East Winterslow has remained relatively undeveloped except for post 1960 building along Mill Lane and the opening up of Glenfield Close. These developments, like those along Tytherley Road, have not changed the basic agricultural scene. The few houses in Weston Lane, built in the late 20th Century, have not changed the overall separate entities, while Middle Winterslow and The Common have effectively been linked by housing.

The area known as Lopcombe Corner was developed piece-meal during the 20th Century. Prior to that, it was simply the junction of two main roads from London to the west, one from Andover the other from Stockbridge.

It was an important junction in the turnpike age, but had virtually no buildings. The turnpikes declined as railway traffic grew and it was not until the age of motoring that Lopcombe Corner saw any development.

It remained isolated until the First World War, when an airfield was built at nearby Hollom Down. The first buildings near the junction appeared in the 1920's and 1930's and were associated with the passing motor traffic in the form of roadside cafés and garages.

Lopcombe Corner Circa 1950
By the mid 1950's, there were three farms and twelve houses and, in addition, five petrol stations, a garage, two cafés, a small sub post office and a small shop which catered for passing traffic, as well as the relatively few residents.

Development at Lopcombe Corner, prior to 1959, was not only restricted by the planners but by the lack of mains water. When this became available in 1959 a limited amount of new building was permitted, with a restriction to single storey construction. By 1982 there were 40 houses, although some recent ones have been of two storeys; with the total now reaching 52. 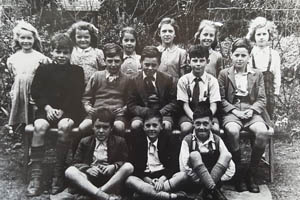 Winterslow Then and Now

Winterslow Then and Now is a local public group on Facebook presenting a selection of fascinating photos from years past of the village and its residents.

Share your memory`s past and present, pictures, stories. No personal adverts please. just keep it fun and friendly.