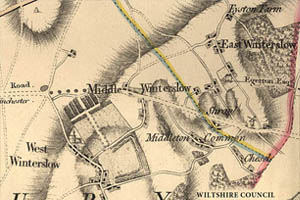 Winterslow is a large parish of about 4,800 acres, some 7 miles east of Salisbury. Its eastern boundary is also the county boundary of Wiltshire and Hampshire. Oval in shape it covers about 5 miles from north to south and approximately 3 miles from east to west, with a population of 2,300. The A30 Salisbury to London road runs from east to west across the northern part of the parish and to the south of the military ranges of Porton Down. At the junction of the A30 and the A 343 (Andover Road) there is the satellite development of Lopcombe Corner, consisting of some fifty dwellings. The northern half of the parish is largely open downland, whereas the southern half is mostly wooded. Historically this separation was crucial to the parish economy. The farmers on open fields depended on products from the woods such as hurdles, spars, sheep cribs, rakes, posts and stakes produced by Winterslow Woodmen. These products generated considerable income for the community. 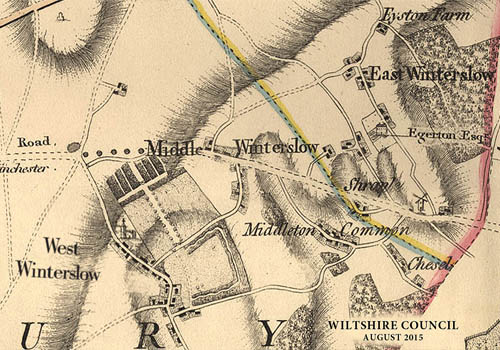 
The history of the parish is that of three separate and distinct manors based on West, East and Middle Winterslow. The first two are mentioned in the Doomsday Book, post­ 1066, the third being created later.

Archaeological evidence shows the area has been occupied for millennia. Neolithic flint mines on Easton Down, dating back to 3,500 BC, lie on Porton Lands and Bronze Age Round Barrows dating back to between 2,000 and 500 BC are located locally .The Roman Road from Old Sarum to Winchester crosses the parish and there is a Saxon cemetery, again on Porton Land. The word Winterslow could have its origins as a result of these burials as its name, derived from the Old English, means ‘winter’s burial mound’.

Winterslow has a Parish Church – All Saints - in West Winterslow with a sister church, St John’s, at the Common. The parish is also served by the Baptist Church on Weston Lane, the Methodist Chapel Gunville Road and Lifeboat Mission at Middleton. 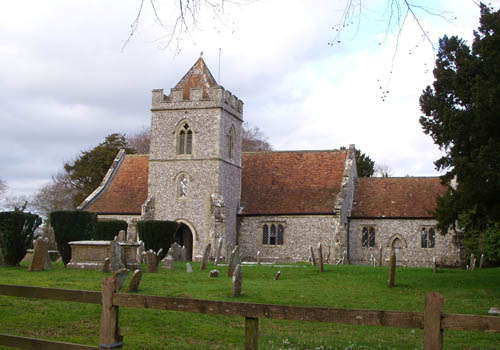 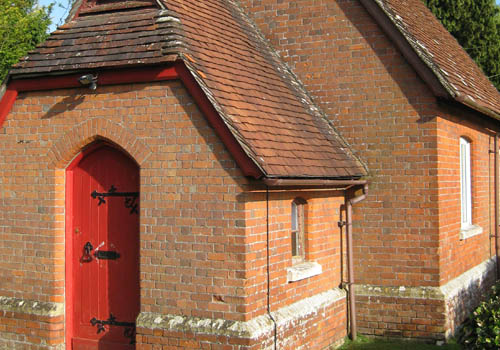 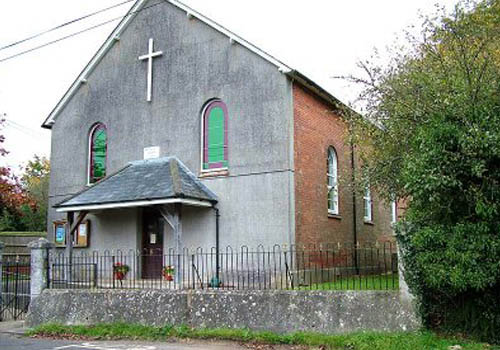 At its height the parish had ten shops scattered throughout the village and four public houses. It is now served by the Lord Nelson public house and the Central Stores shop; which incorporates the Post Office. There are also over seventy businesses of varying sizes operating within the parish, mainly operating from home.

There is a Church of England Primary school, which can trace its history back to a thatched building provided in1833. The school has established an excellent reputation for its educational activities and achievements.

The parish is very well served with a recreation ground and pavilion in Middleton, a new village hall opened in 1992 on Middleton Road, which shares its location with the Doctors Surgery, and Barry's Field Sports Ground and Pavilion on Weston Lane, which opened in 2009.

There are thirty miles of public rights of way maintained by the Parish Council, which are used by residents and frequented by visiting ramblers. These routes incorporate Bentley Wood, which was given by Lady Coleman, as a local amenity in perpertuity, open to all in 1983.

The Parish is a vibrant hive of activity with numerous organisations, societies, groups and clubs providing the community with the opportunity to take part in a wide spectrum of activities. Further information about our history can be found in the Visitors Information section of our website and a copy of The Village Map can be viewed to help locate the places referred to in the text above.
Debfibrillator